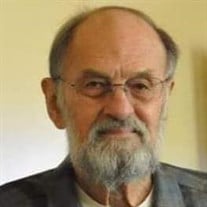 Cliff Adams, age 78, passed away in Everett, WA, on Thursday, December 19, 2019. He was born February 19, 1941 in Chicago, IL, the firstborn son of Anton and Antonette (Konieczka) Adams. He married Billie Ruth Brawner on July 8, 1967 in Mt. Prospect, IL. The newlyweds packed up and drove west, settling first in Seattle, then in Edmonds, WA, where they raised their sons Tim and Craig on Maple Street. Active members of Holy Rosary Catholic Church, they served as a pioneer leadership couple for Worldwide Marriage Encounter in Western Washington and taught faith formation for youth. The family spent weekends and vacations at the A-frame cabin Cliff built near Mt. Index, WA. Cliff perfected his gardens and landscaping, grew and preserved food for the family and fashioned legendary Christmas lighting displays with Nativity centerpiece. After a 32-year career with the USPS, Cliff retired as station manager in 1992. Upon retirement his woodshop hobby became his new business: Canyon Falls Woodworking. He spent most of his waking hours designing, building and delivering works of fine art ranging from the classic name puzzle stools sold on summer Saturdays at the Edmonds Market, to custom designed cabinetry and furniture. A masterpiece of his craftsmanship, a new altar for the 100th Anniversary of Sacred Heart Catholic Church, Bellingham, WA, was consecrated by Archbishop Brunett in June 2005. Cliff was an active member of Sacred Heart, where he and Billie volunteered as members of St. Vincent de Paul Society’s outreach to the poor. Ever present in the lives of his children and grandchildren, in June 2019 Cliff travelled to his grandkids’ swim meet in Spokane, WA, suffering a stroke en route. After four months of rehabilitation in Spokane and Post Falls, ID, he was relocated to Everett, WA, to continue his recovery closer to his Bellingham home. Following complications from the brainstem stroke, he died peacefully at Providence Regional Medical Center in Everett, surrounded by his family. His final words, spoken breathlessly through his ventilator to the priest anointing him: “I have had a good life. Forty three years sober... Amen, Amen.” Cliff was a loving father and grandfather who passed down favorite Polish recipes, traditions and funny sayings. He shared his passion and expertise in the woodshop with his family and taught woodworking skills to scouts. He freely gave what he had been freely given. Cliff will be dearly missed by many for whom he has served as mentor, teacher, sponsor, Godfather, uncle, benefactor, neighbor, friend. Cliff is survived by Billie, his devoted wife of 52 years, sons Tim (Bridget) Adams and Craig (Bethany) Adams, grandchildren Zachary, Joseph, Peter, Josephine, “CJ” Therese, Violet, Sawyer, Weston, and Louisa, brother Wayne Adams, sister Elaine Jacobs, and many loving relatives and friends. Memorials may be made to St. Vincent De Paul, 1110 14th St, Bellingham, WA 98225 or online at www.shbham.org and under the ‘Stewardship’ tab click ‘Time, Talent & Treasure’ then click ‘Sacred Heart Online Stewardship’. Vigil prayer service at Sacred Heart Catholic Church on Monday, December 30th at 6 PM. Mass of Christian Burial at Sacred Heart Catholic Church on Tuesday, December 31st at 11 AM. Reception follows in the parish hall. Committal at 2PM at Bayview Cemetery. You may share memories with the family at www.westfordfuneralhome.com.

The family of Clifford G. Adams created this Life Tributes page to make it easy to share your memories.