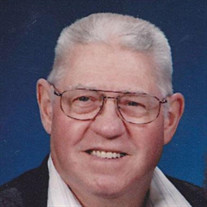 Clarence Morgenthaler, 87, of Bellingham, WA, passed away peacefully on January 4, 2021 from natural causes. Clarence was born on October 5, 1933 in Bellingham, WA, to Robert and Elizabeth Morgenthaler. He attended Harmony Elementary and graduated from Mount Baker High School in 1952. After graduation, Clarence was drafted into the U.S. Army. He was stationed in the U.S. during the Korean War. After serving in the Army, he returned home and started working for Darigold in Bellingham. He soon transferred to the Lynden Darigold where he spent over 35 years. He ran the farm store until it closed, he worked in the Plant with powdered milk, and then retired from the Lab in 1993. Clarence met Norma Pyeatt in 1955 at a youth dance at the Rome Grange. They married on April 1, 1961 and went on to have three boys, Paul, Mark and David. Clarence’s passion was working on his farm. He loved the outdoors, especially hunting and fishing with his sons. He attended Rome Chapel and was a charter member of the Rome Grange. Clarence was a big fan of the Seattle Seahawks and the Seattle Mariners. Anyone who knew him knew he was the most kind and loving husband, dad, grandpa, and uncle a family could ask for. Clarence was predeceased by his parents, brother Wilfred and sister Betty. He is survived by his wife Norma, his sons Paul (Yvonne), Mark (Karen) and David, granddaughter Emma, Karen’s children Shawn and Elizabeth, and numerous nieces and nephews. The link to watch the memorial service is below- click on ‘WATCH SERVICE LIVESTREAM HERE’. To watch the GRAVESIDE SERVICE go to https://youtu.be/Sqm6MUxxdPQ.

Clarence Morgenthaler, 87, of Bellingham, WA, passed away peacefully on January 4, 2021 from natural causes. Clarence was born on October 5, 1933 in Bellingham, WA, to Robert and Elizabeth Morgenthaler. He attended Harmony Elementary and graduated... View Obituary & Service Information

The family of Clarence R. Morgenthaler created this Life Tributes page to make it easy to share your memories.