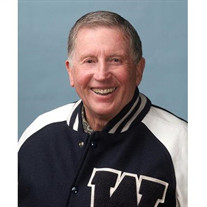 Coach Chuck Randall, age 89, passed away peacefully at home in Bellingham on Wednesday, March 9, 2016. He was born to Charles R. and Novella (Person) Randall in Farmington, WA on December 15, 1926. When he was eight years old his mother Novella passed away. Later his father married Katherine Parker, who was Chuck’s loving mother until she passed away at age 98. Coach served in the U.S. Army as a paratrooper during WWII. He married Doris Reihl in 1948 and they had three children, Jennifer, Jeff and John. He graduated from Central Valley High School, earned a B.A. at Eastern Washington, and a M.A. at Washington State. Randall was named the WWU men’s Coach of the Century for 1900 to 1999. He received hall of fame honors from Central Valley High School, National Association of Intercollegiate Athletics, Western and Eastern Washington University. On May 6, 2015, Randall received the Basketball Old Timers Man of the Year Award at the 63rd annual Basketball Old-Timers Banquet. Randall’s best Western team was the 1971-72 squad that finished 26-4 and reached the NAIA national quarterfinals, winning conference and NAIA District 1 titles. The Vikings won their first 21 games, and took a memorable two-out-of-three district championship series over Eastern Washington, then won twice at nationals in Kansas City, Missouri, before falling. He was named NAIA Area I Coach of the Year that season. Off the court, Randall began the first summer basketball camp for children in the state of Washington during the 1960’s and was an important innovator in the development of breakaway rims. After retiring from WWU, for the next eight years Randall took college students to play basketball and study in Mexico. He also served as a volunteer assistant for the WWU women’s basketball team for a couple of seasons and attended nearly every practice for both the Viking men’s and women’s hoop squads for many years, only in the last few seasons cutting back to just the home games for those two teams. Randall was known as the “Coaches’ Coach” for the high percentage of his players who went on to coach and teach at every level – elementary, junior high, high school and college. In the summer of 1968, Randall took his WWU team on a tour of Asia and Australia under the auspices of People-to-People Program International, the Vikings winning 15 of 21 games. Randall also coached baseball at WWU, directing the Vikings to two national tournament appearances, placing fifth in 1964 and eighth in 1965. In all, Randall coached basketball 35 years, amassing 516 victories. After retiring he enjoyed golfing and making art. Coach was an active member of Garden St. United Methodist Church and the Fairhaven Lions Club. He “walked the walk” with his Lord, accepted people who for who they were and authentically loved them, was passionate about his family, his players and all of his friends. Coach is survived by his loving wife of 68 years, Doris, son Jeff (wife Hideko), daughter Jennifer, son John, granddaughter Novella and many loving relatives and friends. He was preceded in death by his sisters Jean, Ruth and Joy. A Celebration of Coach’s life will be held at Garden St. United Methodist Church in Bellingham at 1 PM on Saturday, April 2, 2016. Reception following. Pastor Terry Hall will be officiating. Gifts in memory of Chuck can be made to the Chuck Randall Men’s Basketball Scholarship at WWU. Donations can be made online at www.wwu.edu/give or by sending a check made payable to the WWU Foundation and mailed to: WWU Foundation, 516 High Street, MS 9034, Bellingham, WA 98225 (please indicate online or on the memo line of your check that your gift is for the Chuck Randall Scholarship), or to Garden St. United Methodist Church.

Coach Chuck Randall, age 89, passed away peacefully at home in Bellingham on Wednesday, March 9, 2016. He was born to Charles R. and Novella (Person) Randall in Farmington, WA on December 15, 1926. When he was eight years old his mother Novella... View Obituary & Service Information

The family of Charles R. Randall created this Life Tributes page to make it easy to share your memories.

Coach Chuck Randall, age 89, passed away peacefully at home in...