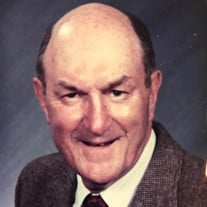 Chuck Olson, age 90, passed away in Bellingham on Sunday, October 28th, 2018. A lifelong resident of Bellingham, Chuck was born May 13, 1928, to Ralph and Louise (Moore) Olson. He attended Campus School and graduated from Bellingham High School in 1946, lettering in football, basketball and track and serving as Class President. Chuck attended the University of Washington on a football scholarship, and was a member of Beta Theta Pi Fraternity, Fir Tree, Big W Club, Oval Club and Phi Delta Phi Law Fraternity. While at UW, he was a three year letterman and captain of the football team in 1949. Chuck played during the Howie Odell years and was a graduate assistant coach while attending UW Law School. He was a Law Clerk for the Washington State Supreme Court. He married Marian Foster on June 19, 1954. Chuck and his brother, Dan, practiced law in Bellingham as Olson and Olson Attorneys. He was City Attorney for Bellingham from 1958 to 1967, served on the Washington State Bar Association Board of Governors from 1974-1977, and was on the board of Cascade Savings and Loan. Chuck was a longtime member of Bellingham Bay Rotary, Tyee Club, Washington Athletic Club in Seattle, and the Bellingham Golf & Country Club. He volunteered and supported the Whatcom County Council on Aging and Camp Easter Seals. Working with Ken Imus, he was instrumental in restoring the Fairhaven District. He loved salmon fishing in the San Juans and at Stewart Island, was an avid golfer, and had three holes-in-one during his golfing years. In 1997, with 70,000 fans in attendance at Husky Stadium, Chuck was honored as the “Husky Legend of the Day” during the San Diego State game on September 13, which was a breathtaking moment for Chuck and his family. He will be remembered as a devoted husband and father, a good friend, and the proudest, most loyal Husky ever! Chuck was preceded in death by his brother Dan Olson and his sister Phyllis Needy. He is survived by his wife of 64 years, Marian, children Sarah (Mark) Davis of North Bend, WA, Ralph (Krista) Olson of Parker, CO, Susan (Dutch) Nordenger of San Diego, CA, grandchildren Jeff, Andy and Jaden, great-grandchildren Finn and Claire, and many loving relatives and friends. In lieu of flowers memorials in Chuck’s name may be made to the UW Dog Aging Project at http://dogagingproject.com or Whatcom County Hospice. A celebration of Chuck’s life will be held at the Squalicum Boathouse on Friday, November 30th at 2 PM. Reception following.

Chuck Olson, age 90, passed away in Bellingham on Sunday, October 28th, 2018. A lifelong resident of Bellingham, Chuck was born May 13, 1928, to Ralph and Louise (Moore) Olson. He attended Campus School and graduated from Bellingham High School... View Obituary & Service Information

The family of Charles "Chuck" Olson created this Life Tributes page to make it easy to share your memories.

Chuck Olson, age 90, passed away in Bellingham on Sunday, October...