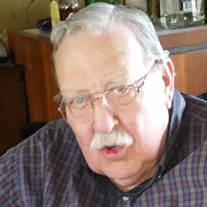 Charlie Bamford passed away on May 30, 2020 in Bellingham. Charlie was born 10/4/1930 in Portland, OR to Charles and Mary (Williams) Bamford. Charlie was preceded in death by his parents, his brother Michael, and his son Jeffrey Tolliver. He is survived by his wife Janice (LaRue) Bamford, his brother John, and many nieces, nephews and cousins; also by special family friend Shawn Tolliver. Charlie attended elementary school in Portland, OR, junior high in west Seattle, and graduated in 1948 from West Linn High School in Oregon. He went to Oregon State University, graduating in 1952 with a BS in physics. He was in ROTC, and during the college summers worked in Alaska on commercial fish-trapping vessels. Upon graduating he entered the US Army as an officer. He completed several tours of duty in the Korean and Viet Nam Wars, earning four Purple Hearts, a Bronze Star, and a Distinguished Service Medal among other honors. After 22 years he retired from the Army in 1971 as a Lt. Colonel. He moved to Bellingham, WA where he bought a gillnet boat and fished commercially. He also embarked upon his career as a structural engineer with local steel companies. He married Janice LaRue in 1974 and adopted her son Jeffery Tolliver. He and Janice lived in their waterfront home on Puget Sound for forty-seven years. Their leisure activities included many vacation trips exploring Georgia Straights on their cabin cruiser, traveling in Europe, and attending European cooking schools. Charlie and Janice, devout animal lovers, adopted several dogs and numerous homeless cats over the years. Charlie loved watching the bald eagles that nested and raised families near their home. Charlie worked for Pederson Bros. for many years, declining to retire until he was 86. Memorial donations to the Whatcom County Humane Society are suggested instead of flowers. In lieu of a funeral Charlie wanted to be remembered with an old-fashioned wake, with good food, strong drink and attendees sharing stories and laughing. This will happen sometime in the future when people are safe to gather again. You may share memories with the family at www.westfordfuneralhome.com.

Charlie Bamford passed away on May 30, 2020 in Bellingham. Charlie was born 10/4/1930 in Portland, OR to Charles and Mary (Williams) Bamford. Charlie was preceded in death by his parents, his brother Michael, and his son Jeffrey Tolliver. He... View Obituary & Service Information

The family of Charles F. Bamford II created this Life Tributes page to make it easy to share your memories.