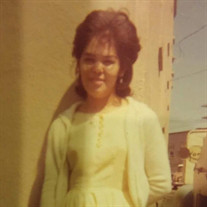 Charlene Swanaset (Thomas), Weh'hy'lia, age 74, passed away on Saturday August 31st, 2019 surrounded by her family. She was born on February 8th, 1945 in Duncan B.C., to the late Angus Thomas and Mary Thomas (Sampson). Charlene was a member of the Nooksack Indian Tribe, and Cowichan First Nations. She resided in Everson, Washington with her husband of 51 years, George Swanaset Sr. Charlene first met her husband George when she was 12 years old. She made him work for her attention until they were 20 years old, when they then began dating while he served in the Air Force. She liked his uniform. They married in 1968 at the Lummi Shaker Church. She was a graduate of the class of 1964 of Nooksack Valley High School; secretary of the Nooksack Council in 1967; she ran the first STOWW-Mart in Deming 1973-1974; was a housewife until her children grew older and then worked for the Nooksack Tribal Daycare in the infant room where her warm heart imprinted onto many babies of the Nooksack Tribe. Selfless, Nurturing, Compassionate, Kind and the matriarch of her family. Charlene was blessed with a large loving family, and easily touched the hearts of everyone she met. She had a heart of gold with a radiant smile to remember. She had an extraordinary love for children, always mothering everyone she met. She had a knack of making sure people were comfortable and always wanted to feed everyone, her pantry was always full of goodies for all the kids she adored.. She enjoyed knitting, crocheting, baking, cooking, and caring for her family. She was the epitome of "grand-mother." Charlene is preceded in death by her parents; Angus Thomas and Mary Thomas (Sampson), Sister; Marilyn Thomas, Brothers; Ronald Thomas, Vincent Thomas, and Clyde Thomas. Charlene is survived by her husband; George Swanaset Sr., Brother; Clifford Thomas, Daughter's; Elizabeth "Betty" King George (Warren) and Cheryl Swanaset, Son; George Swanaset Jr. (Lolita), Grandchildren; Mary Delgado, Roman Swanaset-Simmonds (Bobbi), Vincent Johnson (Nashawnee), Vernon Johnson III (Allison), Cecelia Johnson (Tony), Angela Johnson (Anthony), Amanda Gladstone, Tyrone "Toshi" Gladstone, Nick Gladstone (Violet), Stella Gladstone, Sonya Swanaset-Morris, Marilyn Swanaset-Morris, Daniel "Chance" Swanaset-Point, Jade Rios, Antonio Swanaset, and Leinani Swanaset, 20 great-grandchildren, and numerous children she has claimed throughout her years.

Charlene Swanaset (Thomas), Weh'hy'lia, age 74, passed away on Saturday August 31st, 2019 surrounded by her family. She was born on February 8th, 1945 in Duncan B.C., to the late Angus Thomas and Mary Thomas (Sampson). Charlene was a member... View Obituary & Service Information

The family of Charlene Swanaset created this Life Tributes page to make it easy to share your memories.