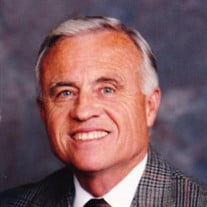 Cecil C. “Cec” Thomas was born October 14, 1929, to Dewey and Lena (Smalley) Thomas in Sedro-Woolley, WA. Sedro-Woolley was also where Cec began his professional career, at a very young age, shining shoes in his father’s barber shop for spending money. And, in a clear indication of his developing pragmatism, he saved up and used those earnings to buy himself his first piece of furniture, a dresser, at the age of 9 years old. In 1947 he graduated from Sedro-Woolley High School and enrolled at Western Washington State College (now WWU) where he met June Hardin. Cec and June were married in Bellingham in 1948, and son Bob was born in 1950. In 1951 he graduated from WWSC and the family moved to Richland, WA, where he accepted a position with General Electric Company at the Hanford Site. Also in 1951, Cec and June welcomed daughter Lynne, who was born at Richland’s Kadlec Hospital. Soon after construction of the new refinery in Anacortes, WA, Shell Oil Company offered him a position and in April of 1955 the Thomas family relocated there. Son Steve was born at the Anacortes Hospital the following year. As young adults Cec and June were both very active in the Anacortes Jaycees and Cec was named as a JCI Senator. Cec and June also earned the honor of Washington State Outstanding Couple of the Year. One of his favorite pastimes was enjoying the outdoors and after taking a mountain climbing class in 1965 with son Bob, mountaineering became a passion that would occupy him for decades. He was a longtime member of the Skagit Alpine Club, and over the years he climbed most of the major peaks on the US west coast and logged many miles on the Pacific Crest Trail; he also enjoyed a trek in Nepal’s Himalayan Mountains. He shared his passion for the outdoors and climbing with many others and developed many longtime friendships. His passion was passed along to his family as well and he climbed several Cascade peaks with his children and grandchildren. Cec remained active in the Anacortes and Skagit County communities for many years and in addition to volunteering his time with the Jaycees and SAC, he was also heavily involved with Anacortes Red Cross, served as president of UGN (United Good Neighbors, now known as United Way) of Skagit County, and in later years was an Anacortes Kiwanis member as well. In this capacity he enjoyed engaging with the city populace year around, selling Christmas trees downtown in the winter time and hot dogs during the “Oyster Run”. He and June enjoyed their life in Anacortes to the fullest, and in addition to their organizational involvement they also could be found attending Croatian Club dinners, ACT plays and had a dinner group that they enjoyed regularly with several other couples from the area. Cec retired from Shell Oil Company in 1985 and after June retired from teaching in the Anacortes School District in 1986, they enjoyed a wealth of travel experiences, visiting China, Turkey, the former USSR, Croatia, Bosnia, and much of the rest of Europe, Central and South America, Australia, New Zealand, and several South Pacific islands. In the latter case they often enjoyed the islands while bare boat sailing with longtime friends Glenn and Sally Dillon, who they also travelled with several times to the Sun Valley Jazz Festival in Idaho. They also included family on many of their travel adventures and those family members continue to carry on their love of visiting new places and meeting new people to this day. Along with his passion for the outdoors Cec was a home hobbyist as well, and over the years could be found in the garden where he loved blending plantings with the natural landscape, in his workshop creating stained glass works, or pouring through his archive of photos, many of which were brilliant captures that were taken on climbing trips or during his international and domestic travels. A few years after June’s passing in 2013 Cec decided to forego the complications of home ownership and moved to the Chandler’s Square Retirement Community in Anacortes. Having always been one to engage socially he found the adjustment easy, and soon made several friends, notably Noel Johnson, who was another longtime “Anacortesian”, and special friend Dee Culver, whose warmth and kindness was much appreciated by his family in his last years. Cec was preceded in death by his parents and his sisters Janice Seman and Janise Stock. He is survived by his children, Bob Thomas of Cathedral City, CA, Lynne Thomas Skerry (Brian) of Bellingham, and Steve Thomas (Lynette) of Snohomish; granddaughters, Kyla Skerry Ockinga (Kelly), Julia Skerry, Lindsey Thomas, and Leah Thomas. Due to Covid-19 restrictions, there is no memorial service planned at this time. In lieu of flowers, the family suggests memorials be made to United Way or your favorite charity. You may share memories at www.westfordfuneralhome.com.

The family of Cecil C. Thomas created this Life Tributes page to make it easy to share your memories.