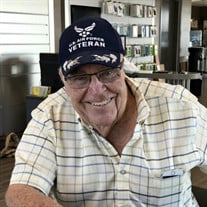 Anderson, Cecil Kelly, age 88, of Bellingham, Washington, passed away on April 9 after a long illness. He passed from this life surrounded by his family. Kelly was born on August 19, 1932 in Seattle, Washington. After graduating from O’Dea Catholic High School, Kelly joined the Air Force in 1951, for a four-year enlistment. Kelly twice served as an honor guard for President Eisenhower. In September 1954, Kelly married Janice Bradford and moved to Salina, Kansas to make their home. After being honorably discharged from the Air Force in January 1955, Kelly and Jan moved to Bellingham, Washington, where they raised three sons and a daughter. After many trips to north central Washington, Kelly, Jan, and their four children, spent many weekends and vacations on a piece of heaven called, “Chain O’ Lakes,” near the Twisp River. Later, they were able to purchase a vacation spot in the heart of the Methow Valley along the west bank of the Methow River, south of Twisp. Since 1984, Kelly and Jan spent nearly every spare moment on their Methow River property. Kelly worked 30 years for Whatcom County, the last 18 years as Whatcom County Maintenance and Operations Supervisor, where he worked long hours to oversee the oiling and chip sealing, and maintenance of hundreds of miles of county roads. Kelly never met a stranger and was loved by all that knew him. Several of his County road maintenance crew remarked how he made those long, hot summer hours fun for those he worked with. Loved ones that will miss Kelly, until they see him again, are his wife, Janice Ann; his son Brad (Heidi); his daughter Kelli (Tim); his son Layne (Janet); his son Drew (Karen); his three brothers, Terry (Barbara), Gary (Wilma), and Randy (Edna); 8 grandchildren (David, Mary, Hailey, Amanda, Abby, Carter, Maggie, and Connor), 7 great-grandchildren, and numerous nieces and nephews. He was preceded in death by his mother, Mary, and his father, Cecil. For his entire life, Kelly was a devoted and faithful Roman Catholic. His family finds comfort in knowing he is now in the arms of our Lord and Savior, Jesus Christ, Amen. Mass of Christian Burial will be held on Thursday, April 15th at 10:30 AM at Church of the Assumption and will also be live streamed at the same location as all of the Assumption Masses at https://www.facebook.com/catholicjeffreyhmoore/. Committal will follow at Ten Mile Cemetery. You may share memories with the family at www.westfordfuneralhome.com. Memorials may be made to Assumption Catholic School.

Anderson, Cecil Kelly, age 88, of Bellingham, Washington, passed away on April 9 after a long illness. He passed from this life surrounded by his family. Kelly was born on August 19, 1932 in Seattle, Washington. After graduating from O&#8217;Dea... View Obituary & Service Information

The family of Cecil Kelly Anderson created this Life Tributes page to make it easy to share your memories.