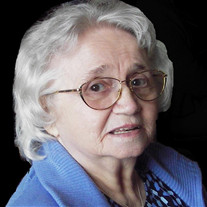 Jane McMillion, age 90, passed away peacefully on Thursday, September 14, 2017, in Bellingham. She was born November 12, 1926, in Trenton, NJ to Bernard J. and Emma Miles. Jane graduated from The College of New Jersey with Majors in English and music and a minor in World History. She taught high school in Lynden for over 20 years, and later in Bremerton and at Assumption School in Bellingham. Jane proudly served as an officer in the U.S. Navy from 1949-54 where she was one of the few women selected in the first class of Korean War WAVES and worked in the bureau of ships as a communications officer. As a commissioned officer, she worked to support the buildup of the 1000 ship Navy that included the construction of the Nautilus. She was a member of the Daughters of the American Revolution, the Veterans of Foreign Wars (VFW), and American Legion Post #7 in Bellingham. Jane sang with the Whatcom Chorale and Church of the Assumption, where she was a member. She had an outgoing personality with a wicked sense of humor. She loved music, animals, and murder mysteries. Jane was preceded in death by first husband Patrick Thomas, second husband Warren McMillion and brother Bernard Miles. She is survived by her four children, Patrick Thomas, Jr. (wife Helen), Rosemary Thomas Reimer (husband Steve), Betty Thomas Beaulieu and Sally Thomas-Lubetich (husband Chris), grandchildren Christina, Evan and Amanda, great-grandchildren Alex, Jameson, Ana and Ian, and many loving relatives and friends. Visitation will be held at Westford Funeral Home on Wednesday, September 20th from 2-4 pm. Mass of Christian Burial will be held at Church of the Assumption on Thursday, September 21st at 10:30 am. Reception following. Committal following at Lynden Cemetery. Memorials may be made to Hope House at Church of the Assumption, 2116 Cornwall Ave, Bellingham, WA, 98225. Share memories with the family at www.westfordfuneralhome.com.

Jane McMillion, age 90, passed away peacefully on Thursday, September 14, 2017, in Bellingham. She was born November 12, 1926, in Trenton, NJ to Bernard J. and Emma Miles. Jane graduated from The College of New Jersey with Majors in English... View Obituary & Service Information

The family of Catherine “Jane” Thomas McMillion created this Life Tributes page to make it easy to share your memories.