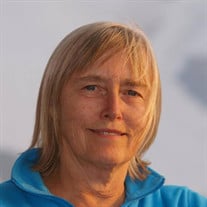 Carol Woody, age 73, passed away peacefully at the Whatcom Hospice House in Bellingham, Washington. She was born February 2, 1948, in Fall City, Washington to George and Dorothy Isackson. Carol attended Mount Si High School and graduated from Wenatchee Valley Community College where she met her husband, Steve Woody. Carol married Steve on December 6, 1968, where they raised two daughters, Christine (Woody) Smith and Leigh Woody in Bellevue, Washington. They moved to Bellingham in 2017 to live close to their daughters who both reside in Bellingham with their husbands. Carol was many things in life to many people, but she was most proud of being a mother. Throughout her life she guided her daughters to be the people they wanted to be and to learn from her successes as well as her mistakes. As a professional she was an educator/ job coach to high-school aged youth with developmental disabilities in the Bellevue School district. It was her pride to help these young people have jobs and be active in their community. She loved talking about “her kids” and seeing them grow. Carol was a skier and through skiing she made many life-long friends. She was a ski instructor at Alpental Ski Resort. Later at Whistler she and her husband became part of a group they dubbed the Peak-to-Creek Downhill Team. She, along with her husband Steve taught her daughters to ski at a very young age so the whole family could ski together in the winter months. In the summer she enjoyed hiking, photography, and bicycling. In recent years, she and her husband started doing Zumba classes together in Bellevue and found a community of people who were fun and energetic, but also gave back to the community through fund-raisers at the Ronald McDonald House in Seattle. Carol loved to be a helper, especially when she was helping her daughters pursue their passions. She was happiest when she was painting and varnishing on Christine’s tour boat or putting a final coat of oil on Leigh’s chainsaw artwork. It gave her great pride to promote both of her daughter’s endeavors. Carol is survived by her husband Steve Woody, and daughters Christine Smith and Leigh Woody, as well as her siblings, George Isackson, Kathy Weber, and Rick Isackson. She will be missed by all who she touched. Her family would like to extend the deepest gratitude to the staff at the Whatcom Hospice House who created a warm and comfortable place for her last days. A celebration of her life will be announced at a later date.

The family of Carolyn J. "Carol" Woody created this Life Tributes page to make it easy to share your memories.

Carol Woody, age 73, passed away peacefully at the Whatcom Hospice...