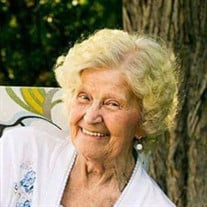 Carolyn Bell, age 92, passed away in Bellingham on Saturday, April 4, 2020. She was born April 23, 1927 in Bellingham to Arthur and Adeline (Titcomb) Hook. As a young girl, Carolyn spent summers in Ketchikan working as a diving assistant on her father’s boat. She graduated from Bellingham High School in 1945 and from Colorado Women’s College in 1947. Carolyn began her work career at the Bellingham Herald and then a stint at the Los Angeles Times while living briefly in California where she met her husband, Bob Parks. Upon returning to Bellingham, Carolyn went to work as secretary to Mayor John Westford. She was part of his office for as long as he was the mayor. The city council decided to computerize the city and hired IBM to make that happen. IBM tested 46 city employees. Any employee had to be released by their manager prior to moving into the computer program. IBM shared that one employee had the highest score ever in Washington. They went directly to the current mayor to get his approval for his secretary, Carolyn, to be transferred into the new Information Services Dept. That dept. was created in 1963 and she was an integral part of it for 18 years. In the late 1970’s, she reconnected with Don Bell, an old friend from Ketchikan. Don was president of Alaskan Loggers Association and as they rekindled their friendship, he decided he needed a good computer programmer. They married in 1980 and lived a wonderful life with travel, family and time at their cabin until Don passed away in 1997. Carolyn remained in Ketchikan until late 2019 when she returned to Bellingham. Carolyn was preceded in death by her husband Don and her son Perry. She is survived by three children, Kirby Parks, Tim (Voula) Parks and Holly Campbell, grandchildren, Kallee, Loree, Jaimee, Griffin, Sean, Adrian and Summer, eight great-grandchildren, brother David (Sue) Hook, and many loving relatives and friends. She is also survived by Don’s kids, Jim (Ann), Gary (Gloria), Diana (Mike), 7 grandchildren and 15 great-grandchildren. A private family gathering will be held. You may share memories with the family at www.westfordfuneralhome.com.

Carolyn Bell, age 92, passed away in Bellingham on Saturday, April 4, 2020. She was born April 23, 1927 in Bellingham to Arthur and Adeline (Titcomb) Hook. As a young girl, Carolyn spent summers in Ketchikan working as a diving assistant on... View Obituary & Service Information

The family of Carolyn J. Hook Parks Bell created this Life Tributes page to make it easy to share your memories.

Carolyn Bell, age 92, passed away in Bellingham on Saturday,...