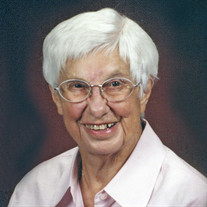 Carol S. Radke, beloved mother and grandmother, passed away on Tuesday, September 20, 2016 in Bellingham, age 94. Carol was born on March 24, 1922 in Coeur d' Alene, Idaho. She was raised in Everett, Washington and attended the University of Washington, where she graduated with honors in 1944 with a Bachelor of Arts degree in Journalism. She was the first woman editor-in-chief of the University of Washington Daily, the University newspaper. Furthermore, Carol was editor of the Tyee, the University yearbook and was a member of the Mortar Board. Bellingham became Carol’s home in 1953. Carol was a longtime community leader, respected for her many years of public service to education. She was first elected to the Bellingham School Board in 1971 and served until 1992. She also served on the Washington State School Directors Association. A longtime local civic and political leader, Carol was a forceful advocate for numerous local causes, and an ardent Democrat. Carol loved her friends and neighbors and was active in many groups, including American Association of University Women (AAUW), Ivy Club, various bridge groups, two longstanding book clubs, a swim club group calling themselves “the Swimmin’ Women”, and numerous Western Washington University activities. Carol is survived by her daughter Kristine Ilgenfritz (Douglas); son Kirk (Elizabeth Gerring) and Mark (Helen Chaikovsky), as well as her four grandchildren, Stephanie, Nicole, Anthony and Thomas. She was preceded in death by her beloved husband of 55 years, Dr. August Carl Radke, Jr., who was a Professor of History at Western Washington University for 36 years from 1953 until his retirement in 1989. It was Carol's wish, despite her love of flowers, that in lieu thereof, memorial donations may be made to the Western Washington University Foundation, 516 High Street, Bellingham, WA 98225 (phone: 360-650-3027) in the name of "Radke Family Faculty Award." You may share memories with the family at www.westfordfuneralhome.com.

Carol S. Radke, beloved mother and grandmother, passed away on Tuesday, September 20, 2016 in Bellingham, age 94. Carol was born on March 24, 1922 in Coeur d' Alene, Idaho. She was raised in Everett, Washington and attended the University... View Obituary & Service Information

The family of Carol S. Radke created this Life Tributes page to make it easy to share your memories.

Carol S. Radke, beloved mother and grandmother, passed away on...