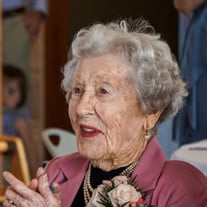 Carmel Frances Dellecker passed away peacefully at Mt. Baker Care Center in Bellingham on April 20, 2020 at the age of 101. She was born on June 15, 1918 in County Longford, Ireland to Patrick and Catherine Whyte, dairy farmers. She attended Catholic state schools in Westmeath and Galway and after completing her secondary education in 1936, went to England, where she worked in a Catholic boarding school and later as a nanny for a family of American expatriates living in London. When the family’s father suddenly died in January 1939, his widow decided to return to the US immediately with her children, and Carmel accompanied them, finding herself suddenly and unexpectedly in America. She recalled years later having been dazzled by the bright blue sky of a cold mid-winter’s day in Manhattan, and by the skyscrapers of Wall Street. Carmel continued to serve as a nanny to the family in New Jersey and then, in 1942, met the love of her life, Ray Dellecker, at a dancing school. They married in June 1943 just before Ray left to serve in the US Army. They had two children, Ray born in 1944 and Terence born in 1946. Following the war, Ray Sr. was employed as a printer for most of his career. Carmel worked at what she called the “old” (as in “good old”) AT&T for 15 years. She was a dedicated and assiduous worker and received numerous awards for her faithful service to the company until her retirement in 1983. Carmel was a devout member of the Catholic Church all of her life, faithfully attending mass every Sunday and often on other days as well, and saying a rosary every night for some 80 years. Following her move to Bellingham in 2010, she became a member of the Church of the Assumption and lived among dear friends at The Willows for 10 years. In addition to her two sons, she leaves six grandchildren and 13 great-grandchildren, as well as two lovely daughters-in-law and six grandsons- and granddaughters-in-law and numerous other relatives. They are widely scattered across the US (in Washington, California, Illinois and New York) and Europe (in Ireland, France and Switzerland), but distance only made their hearts grow fonder. She was deeply loved by all (the grandchildren and great-grandchildren adored their “Gigi”, and she loved them back), and all remained in close touch with her until the end. For her part, she never forgot a birthday or a wedding anniversary. Carmel’s most salient trait was her unshakeable optimism. She had a stiff upper lip (and expected others to have one, too) and simply refused to see the bad side of things. She often said, even in her later years when age was taking its inevitable toll that it was not worth complaining: “It won’t change anything.” She believed, and everyone else agreed, that that was the secret of her longevity. It certainly was the secret of her happiness and serenity, despite even the loss of her beloved husband Ray in 2006. Carmel will be laid to rest with Ray at Tahoma National Cemetery. A Mass of Christian Burial will be held at the Church of the Assumption at a later date. Memorials in Carmel’s name may be made to the Bellingham Public Schools Foundation, 1306 Dupont St., Bellingham, WA, 98225. You may share memories with the family at www.westfordfuneralhome.com.

Carmel Frances Dellecker passed away peacefully at Mt. Baker Care Center in Bellingham on April 20, 2020 at the age of 101. She was born on June 15, 1918 in County Longford, Ireland to Patrick and Catherine Whyte, dairy farmers. She attended... View Obituary & Service Information

The family of Carmel F. Dellecker created this Life Tributes page to make it easy to share your memories.