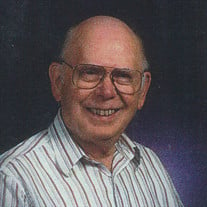 Calvin “Cal” Charles May, of Ferndale, WA, went to be with his Lord on Friday, October 17, 2014 surrounded by his loving family. Cal was born in Ryderwood, WA on April 21, 1926 to Frederick Lafayette and Sophia Solina (Palmer) May. Cal was preceded in death by his parents, son Donald Charles May, brother Dwayne and sister Shirley. He is survived by his loving wife Anita Marie; children, Sheri Lea Willson, Marie Elaine Birdsey and Gary Wayne (Georgia) May; daughter in law, Margie Bakker; 19 grandchildren, 36 great grandchildren, sisters Dessie Luby and Dorothy Scott, brother Clyde (Dixie) May and many nieces and nephews. Cal was raised in Eatonville, WA where he went from Kindergarten through graduation in one school. After graduation he joined the Forestry Service until entering the US Navy in March of 1944 going to boot camp in Farragut, ID. He spent time in Jacksonville, FL, San Diego, CA, and Whidbey Island Naval Air Station where he was honorably discharged in June of 1946 as an aviation radioman III class. He enjoyed his time in the Navy serving the country he loved. Cal married Anita Hammer, the love of his life, on November 23, 1947. There were four children born of this union. Cal worked as an accountant for 57 years after attending Bellingham Business College in 1949. He eventually bought the accounting business he was working for and renamed it May Accounting and brought in his brother Clyde as a partner. In 1988 Clyde purchased Cal’s half of the business when Cal retired. He continued to work for Clyde part time. Cal not only helped many people with their accounting needs, but considered them friends. He enjoyed hunting, fishing and clam digging with his family. Cal also enjoyed camping and traveling with his family around the country to see the beauty in the nation he loved. He especially loved going to the Oregon coast with his family where they did a lot of rock hounding. One of Cal’s favorite things to do at home was to read to his family books written by Patrick McManus. There was much laughter that went along with the reading of these books as well as conjuring up memories for Cal. He was an avid berry picker, especially enjoying picking Northwest wild blackberries which his wife used to make hundreds of pies that were enjoyed by many family and friends. Cal also enjoyed taking walks, cutting wood and clearing brush from his land. After years of prayer by family and friends, Cal, at age 85, came to trust in the Lord as his Savior. He loved the Scriptures and the old time hymns. Cal treasured his time with his family, and we loved and treasured our time with him. We will miss him always. A visitation will be held on Sunday, October 26th from 1-4 p.m. at Westford Funeral Home. Graveside services will be held Monday, October 27th at 11 a.m. at Greenacres Memorial Park with a Celebration of Cal’s life to follow at 1:00 p.m. at Immanuel Bible Church, 2000 W. North St., Bellingham with a lunch reception following. Cal’s immediate family wishes to thank extended family and friends for their prayers and support during this difficult time. Memorials may be made to Immanuel Bible Church and Whatcom Hospice House.

The family of Calvin "Cal" C. May created this Life Tributes page to make it easy to share your memories.

Calvin “Cal” Charles May, of Ferndale, WA, went to be with his...