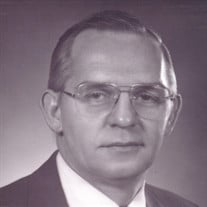 Byron Swedberg, age 84, passed away in Bellingham on Tuesday, July 9th, 2019. He was born October 15, 1934 in Oskaloosa, Iowa to Oscar and Mildred Swedberg. Byron was captivated by the Pacific Northwest as a child while on a trip with his Aunt Ruth to visit his Uncle Paul at his cabin on Whidbey Island. He vowed to head west after finishing college. He graduated from Drake University in 1956 and married his college sweetheart, Shirley Hague, on August 22, 1959 in Iowa. Byron graduated from the University of Washington School of Law in 1962 with the support of Shirley, who taught elementary school in Seattle. Byron went on to practice law in Bellingham for seven years until he was appointed to the Whatcom County Superior Court by Governor Dan Evans. He served as a justice from 1971-93. He was active in the Masonic Lodge, Kiwanis, Jaycees, the Hobby Club, and sat on the board of the Salvation Army. Byron also served as president of the Boy Scouts of America Mount Baker Council and was proud that both of his sons became Eagle Scouts. Byron was preceded in death by his parents and his sister, Betty Harty, of Salem OR. He is survived by his wife of nearly 60 years, Shirley, sons Scott (wife Jeannie) of Selah, WA, and Steve (wife Nicole) of Seattle, grandchildren, Nate and Chloe, nieces Kirsten, Gretchen, Sonja, and Linnea, and many loving relatives and friends. Byron lived a life of honor, loyalty and had a great sense of humor. His rich character will never fade from our memories. Although his presence in our lives is deeply missed, the legacy that he built throughout his life continues to live on in us, and this way he will never truly leave us. A memorial service will be held at Westford Funeral Home on Saturday, August 3rd at 11 AM. Memorials may be made to The Salvation Army or Mount Baker Boy Scouts of America. A reception will follow across the street at Westford’s Broadway Hall.

Byron Swedberg, age 84, passed away in Bellingham on Tuesday, July 9th, 2019. He was born October 15, 1934 in Oskaloosa, Iowa to Oscar and Mildred Swedberg. Byron was captivated by the Pacific Northwest as a child while on a trip with his Aunt... View Obituary & Service Information

The family of Byron L. Swedberg created this Life Tributes page to make it easy to share your memories.

Byron Swedberg, age 84, passed away in Bellingham on Tuesday,...