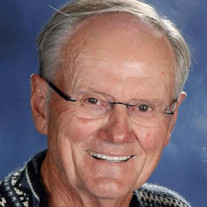 Byron Johnson, age 80, passed away peacefully in Bellingham on Saturday, April 4, 2020. He was born December 28, 1939 in Los Angeles, CA to Clayton and Frances (Nelson) Johnson. Byron graduated from Mexico City College with a degree in International Business in 1962 and remained fluent in Spanish throughout his lifetime. Byron was a Lieutenant in the United States Navy and served for seven years in Naval Intelligence during the Vietnam War. While stationed in Japan from 1967-1969, Byron learned Mandarin Chinese and used his language skills as a Cryptographer and Interpreter aboard the USS Providence, the Commanding Ship of the 7th Fleet. He married Donna Wahlgren on September 11, 1965 in Panama. Upon retiring from the Navy in 1969, they moved to Bellingham. Byron and Donna were active members in the Meridian School District. Byron was Cub Scoutmaster and PTA president. Together he and Donna ran the fair booth and chaperoned numerous school dances and events, most notably the Meridian ski bus for 15 years. In 1984 Byron founded McClary, Swift & Co., a customs brokerage business in Blaine and was President of the Northern Border Customs Brokers Association for two years. All three of Byron’s children graduated from WSU and he was an avid Coug fan. Byron and Donna are members of the Church of the Assumption in Bellingham. Byron enjoyed boating in the San Juans, fishing, skiing, collecting (anything and everything!), gardening at the family home on the Kelly Road for 50 years and most of all, his family. He will be remembered as a loving husband, father and grandfather. Byron was preceded in death by his parents. He is survived by his loving wife of 55 years, Donna, children Jennyne Johnson (Jeff Bates), Mark Johnson (Staci) and Natalie Milligan (Stephen “Spike”), grandchildren Bradley, Joshua, Oliver, Drew, and Rhys, and many loving relatives and friends. In lieu of flowers, memorials in Byron’s name may be made to Church of the Assumption, 2116 Cornwall Ave, Bellingham, WA 98225. Mass of Christian Burial will be held at Church of the Assumption at a later date. You may share memories with the family at www.westfordfuneralhome.com. As Byron would say, “There is a great adventure everywhere, you just have to look for it.”

Byron Johnson, age 80, passed away peacefully in Bellingham on Saturday, April 4, 2020. He was born December 28, 1939 in Los Angeles, CA to Clayton and Frances (Nelson) Johnson. Byron graduated from Mexico City College with a degree in International... View Obituary & Service Information

The family of Byron Carl Johnson created this Life Tributes page to make it easy to share your memories.

Byron Johnson, age 80, passed away peacefully in Bellingham on...