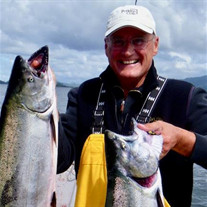 Byron Lee Elmendorf was born on October 8, 1944 in Evansville, Indiana… but let’s get to the part in every obituary he always wanted to read – how he died. Byron died on November 21, 2017 while playing in Hanalei Bay on Kauai, Hawaii with two of his grandchildren. Byron lived a great life and we hope when our time on this earth is up, we are all lucky enough to go wearing Hawaiian shorts, doing something we love, with the people we love most. Byron was the son of Nancy and Albert Elmendorf and the younger brother of Ken Elmendorf, all of who preceded him in death. He grew up in Evansville, Indiana and was an All-State athlete in football and wrestling. During his freshmen year at Indiana State University, he met his ultimate partner in adventure, Becky Barnes. They met in a calculus class where Byron quickly realized that it would be easier to marry a math major than to be one. This would also allow him to pursue a career in recreation. He became the University’s first graduate with a degree in Parks and Recreation. Upon graduation, Byron joined the Marine Corps in 1966. After Officer Candidate School at Quantico, he was stationed at Camp Pendleton. Byron married Becky in the summer of 1967. He then had to leave her in a beachfront house in Oceanside, California, to enjoy the jungles of Vietnam during the Tet Offensive of 1968. Byron faithfully served the United States Marine Corps for 29 years, retiring as a Lt. Colonel. Post-Vietnam, Byron and Becky moved to Flagstaff, Arizona where he started his career in parks and recreation and both began and ended his Hollywood movie career. Please enjoy his 31 second performance as “Trooper #2” in the western movie classic, The Bravos. The movie role, combined with parachuting onto a cactus, and being bucked off his rodeo horse, led Byron to realize the Flagstaff box had been checked. He and Becky then moved to Michigan where Byron earned his Masters Degree in Community Education. In 1972, Byron and Becky moved to Vancouver, Washington where Byron was the assistant Parks and Recreation Director for the City of Vancouver. In 1973, they welcomed their son, Tyson, and a year later, their daughter, Amy. In 1978, the family moved north to Bellingham where Byron finally laid down his roots. He was named the City’s first Director of the combined Parks and Recreation Department. His first project was the development of Boulevard Park, which, along with the building of the aquatics center, remained two of his proudest accomplishments. Byron enjoyed serving the City of Bellingham for 23 years. He was a do-er and a decision maker. He made many friends along the way, as well as a handful of critics who did not appreciate his unique style of leadership. Everyone was always allowed to vote, but the only vote that ever counted was Byron’s. We can’t tell the story of Byron’s life and not talk about his many friendships. His friends were very important to him and he LOVED to entertain… often pairing a meal with a “Ten Cent Tour” of all of the City’s parks. Byron was truly Bellingham’s best ambassador. Whether it was a lifelong friend, or someone he had just met, everyone was welcome at the Elmendorf house. After retiring at age 55, he made the most of it. He loved the outdoors. He spent his days on the water in numerous boats fishing, crabbing, or just enjoying the islands. On land, he treasured his time golfing with his buddies of 27 years, affectionately known as “The Buttheads.” A perfect end of the day was watching the sun set over Bellingham Bay from his deck. All activities were better with a cold beer in hand. He followed Becky around the world on all of her crazy trips. He was happy to go wherever she wanted, yet always compared every exotic location to something that could be found in Washington State for thousands of dollars less. Byron is survived, loved, and missed by his wife of 50 years, Becky, children Tyson (Shannon) and Amy (Patrick), and his four grandchildren - Charlie, Jack, Griffin, and Gretchen - and his chocolate lab, Mousse, along with countless friends he considered to be family. Please join us for a celebration of Byron’s life on Thursday, December 7th, at 11:00 A.M. at First Presbyterian Church, 1031 Garden Street, with a reception to follow at the Squalicum Boathouse at Zuanich Point Park, 2600 North Harbor Loop Drive. You may share memories with the family at www.westfordfuneralhome.com. The best way to honor our beloved husband, father, and Bubba, is to spend time outdoors with those you love. SEMPER FI.

The family of Byron Lee Elmendorf created this Life Tributes page to make it easy to share your memories.