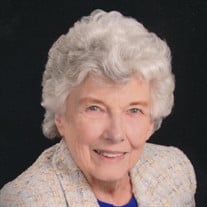 Beverly J. Balch Blair, 89, died peacefully at home on January 6, 2021. Born July 24, 1931, in Seattle to True and Hilda (Sund) Balch of Brinnon, Wash., she was named for Beverly, Mass., where the Balches first settled in the early 1600s, and Josephine, for two aunts. She attended school through the eighth grade in Brinnon and graduated from Quilcene High School in 1949. She attended Washington State College for two years and later earned a bachelor of arts in Education at Western Washington State College. After meeting as teenagers at a church camp, Beverly married Ewald R. “Avie” Klimke of Enumclaw in 1951. The two returned to WSC where Avie finished his veterinary medicine degree and Beverly worked as a secretary. The young couple started a practice in Enumclaw, but world events intervened and Avie was called up during the Korean conflict, serving in the Army Veterinary Corps “inspecting hot dogs.” They were stationed in Chicago, Philadelphia and then Pittsburgh, where their son, Arni, was born. Eager to make use of their time on the East Coast, they traveled to as many historical sites as they could, and drove cross country several times. When Avie was discharged, they returned to Enumclaw. Sadly, just before their daughter, Karen, was born in 1958, Avie was killed in a traffic accident. Beverly and the children moved to Bellingham so she could finish school. She joined the First Congregational Church where she met Douglas Blair, a widower with four children: Robin, David, Douglas and Patricia. They married in 1961. After student teaching at Marietta, Beverly taught at Birchwood Elementary for the 1961-62 school year. As Doug was on the school board, she could not continue teaching. She “retired” to tend to her large blended family. There were challenges, but she put dinner on the table seven nights a week, kept everyone in clean clothes, baked six loaves of bread at a time, nursed the children through all the childhood illnesses, tolerated their menagerie of pets and encouraged them with music lessons, hobbies and sports, and then started welcoming grandchildren into the family. She enjoyed family camping trips around the Northwest and spending time at the family cabin on Pleasant Harbor near her childhood home, as well as adventures on the family boat. During all these vacations, she continued to put dinner on the table every night. After the kids all left home, Beverly and Doug enjoyed a cruise to Alaska, a tour of Great Britain, and trips around the United States and Canada. She especially liked any time spent near saltwater, which was "good for what ails you." Doug fell ill with leukemia in 1974, and Beverly spent the summer at his hospital bedside in Seattle. When they came home, she administered the shots needed until Doug was in full remission. Beverly enjoyed: volunteering at St. Luke’s Hospital and the Whatcom Museum; knitting, needlework and pressing flowers for the hundreds of handmade cards she sent; and keeping an eye on the neighborhood. She was an avid letter writer, corresponding with family (including cousins in Norway, Avie's family, Doug's Canadian relatives and the family of his late wife, Marie) and friends, including 60 years with a penpal in England, and over 70 years with a friend met when they were teenage delegates to a church conference in Grinnell, Iowa. She treasured her kind and caring neighbors. She was known as an excellent pie baker and potato salad maker and she will be remembered with every batch of Christmas cinnamon rolls made. In a life with its fair share of sadness and health concerns, Beverly retained an appreciation that she had been lucky, and felt for others who had experienced even harder times. While she had a pacemaker and four cancer diagnoses, she was never really ill until the end. She had happy childhood memories of her parents and grandparents, of playing on the beach with her sisters, community dances, and working in her dad’s general store, where she learned how to speak with anyone, a skill she kept all her life. Beverly is survived by Robin (Dennis) Williams, Bellingham; David (Cheryll) Blair, Bellingham; Douglas Blair, Seattle; Arni Klimki, Alger; Patricia Blair, Seattle; Karen (Craig) Troianello, Yakima; sister Trula Knudson, Vaughn; many grandchildren and great-grandchildren; as well as nieces, nephews and cousins. She was preceded in death by her parents, her husbands (1958 and 2001), her sister, Florence Sicks (2019), daughter-in-law Linda Blair (2019), and other family members. A memorial service at First Congregational Church will be held at a later date when it is safe to gather. Memorials may be made to the Bellingham Food Bank, Bellingham Public Library or Hospice of Whatcom County, whose help was greatly appreciated. You may share memories of Beverly at www.westfordfuneralhome.com.

The family of Beverly J. Balch Blair created this Life Tributes page to make it easy to share your memories.