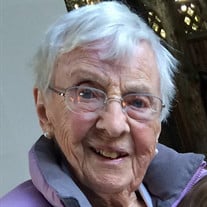 4/29/1924 – 2/14/2016 Bess Christman, age 91 of Bellingham, passed away peacefully on February 14, 2016. She was born to St. Clair and Harriet Riesenmen in Denver, CO on April 29, 1924. In 1953 she married Robert Christman, and they spent 59 wonderful years together until his passing in 2012. Bess was a faithful and devoted member of Sacred Heart Catholic Church. Together Bess and Bob adopted, loved, and raised their four children. She was active in many local organizations including Interfaith Coalition (Board Member), Lydia Place (Founding Mother), Catholic Community Services, Volunteer Chore program, Opportunity Council, Northwest Regional Council, Maple Alley Inn, Whatcom Volunteer Center (Board of Trustees), AAUW, Church Women United and the Women of Western. Bess was recognized by the Mayor of Bellingham as a Citizen of the Year and was inducted into the 2000 YWCA Northwest Women’s Hall of Fame. Bess was preceded in death by her husband Bob and her son Mark. She is survived by children Maribeth Joy and husband Mike, Matthew Christman and wife Alona, and Maureen Christman, her best friend since childhood, Sr. Jeanne Crapo, OP, many loving Riesenman and Christman relatives, countless friends, and her loving golden retriever Amber. The family wishes to thank the Circle of Life Caregivers and the staff at PeaceHealth St. Joseph Hospital. Memorials may be made to Interfaith Coalition, 910 14th St., Bellingham, WA 98225. Services will be held at Sacred Heart Catholic Church as follows; Vigil Service on Monday, February 22nd at 7 PM, Mass of Christian Burial on Tuesday, February 23rd at 11 AM. Reception following.

The family of Bess R. Christman created this Life Tributes page to make it easy to share your memories.