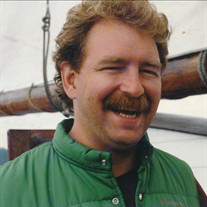 A Celebration of Life will be held for Barney Higgins at 2pm on Sunday, October 26th at Broadway Hall, 1300 Broadway St. in Bellingham. He is survived by his wife Laura Jefferts and a large, extended family. Barney was a writer, a published poet and a film credited actor. He was a member of the Bellingham Area Cribbage Association, Bellingham Racquetball Club, the Chuckanut Bay Athletic Association, and the exclusive Red Breast Society. He was a wine aficionado and gourmet cook, quick with a joke, and a talented story teller. From his rendition of 'Trouble' from ‘The Music Man' to his recitations of ‘The Shooting of Dan McGrew' and 'The Cremation of Sam McGee', Barney's true life pursuit was effortlessly bringing joy to others. Barney was a gentleman. He was ever present, loved life, and being with those he loved. Barney was born in Mansfield, Ohio to Margaret Ann Collins and Jerome Patrick Higgins. He attended elementary school in Cleveland Heights before the family moved to North Canton, Ohio where Barney attended Central Catholic High School in Canton. After graduation Barney attended John Carroll University in Cleveland, Ohio studying language and communication. While there, he excelled in the sport of Rugby leading to an illustrious international amateur athletic career spanning four decades. Barney began his professional career in Cleveland as a Bartender. It was here that he first developed his interest in sailing by helping friends build a boat. Barney moved to the Pacific Northwest with family and friends in the mid 70's and became a well-known and beloved Bartender in Portland, Oregon. His work in the food and beverage industry spanned 15 years and brought him to Seattle and then Bellingham in 1993. Barney's love of the sea and sailing grew with his close involvement in the restoration of the historic sailing vessel Zodiac. By 1997 Barney had leveraged his experience into an Able Bodied Seaman position with Crowley Marine Services working on tugboats escorting oil tankers in Alaska. Barney was one of the last seaman to come up through the 'Haws Pipe’ (on merit alone) starting as a ships cook and advancing to Chief Mate before obtaining his Captain’s license. Barney was loved and admired by his co-workers and remembered for his always positive and upbeat attitude. One of Barney's final challenges in pursuit of his certifications was mastering celestial navigation. He passed the course with flying colors. May it serve him well on his final voyage.

A Celebration of Life will be held for Barney Higgins at 2pm on Sunday, October 26th at Broadway Hall, 1300 Broadway St. in Bellingham. He is survived by his wife Laura Jefferts and a large, extended family. Barney was a writer, a published... View Obituary & Service Information

The family of Bernard J. "Barney" Higgins created this Life Tributes page to make it easy to share your memories.

A Celebration of Life will be held for Barney Higgins at 2pm...