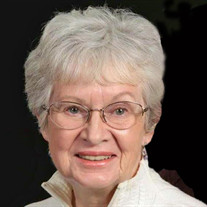 Ariel L. Deer, of Bellingham, WA, passed away Monday, February 29, 2016 at Whatcom Hospice House. She was 78, born on July 20, 1937 in Shelton, WA, the youngest daughter of seven children born to Harold and Martha (Wagner) Dunbar. Ariel was raised in Shelton and graduated from Shelton High School in 1955, where she was selected Forest Festival Queen. She married Ted Deer on September 13, 1958 in Shelton. In 1966 Ariel and Ted moved their family to Bellingham. Ariel loved singing, music, painting and art as well as gardening. She was an active member of Faith Lutheran Church, where she served in many roles, including Choir Director for several years. Ariel was preceded in death by her sister and her three brothers and is survived by her husband Ted; daughters, Teryl Orrico and Pam Deer; two granddaughters, Sarah and Paige Orrico; sister Lee Kingery; brother Gene (Barb) Dunbar; sister-in-law Virginia Dunbar and many nieces and nephews. Ariel was a loving and kind wife, mother, sister, grandmother and friend to many and she will be greatly missed. Memorials may be made to Faith Lutheran Church, 2750 McLeod Rd., Bellingham, 98225. Services will be held at 2:00 p.m. on Saturday, March 5, 2016, at Faith Lutheran Church. Reception following. Pastor Sharon Swanson will be officiating.

The family of Ariel L. Deer created this Life Tributes page to make it easy to share your memories.