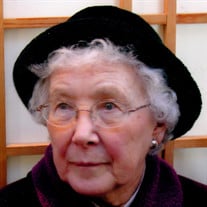 Anne Gordon, a resident of Chandler's Square for many years, passed away peacefully in Anacortes, Washington on January 6, 2017 at the age of 96. Anne was born at home on April 29, 1920 to Howard and Annie Powell on a wheat farm near the prairie town of Rosetown, Saskatchewan. She attended a one room school house for primary school and attended high school in Rosetown, where she boarded during the week. She went to college at University of Saskatchewan in Saskatoon, Saskatchewan and graduated in 1941. All 7 children in her family graduated from college, a fact of which she was very proud. Following graduation, Anne moved to Montreal, Quebec, where she found work and a year later married William Gordon, a classmate in Rosetown and Saskatoon. Following their marriage in Montreal in July of 1942, Anne and Bill moved to the United States to assist in the war effort. During World War II, Anne and Bill lived in Woods Hole, Massachusetts, where Bill worked for the Oceanographic Institute. Her first child, Claudia was born in Woods Hole. After the war, the family moved to Columbia, Missouri, where Bill worked as a professor. Here Anne's two other children, William and Alison were born. After 5 years at the University of Missouri, the family relocated to Massachusetts, where Bill worked as a researcher at Arthur D. Little, an industrial research firm. In 1962 family moved again when Bills career took him first to Washington, DC, then to Mt Lebanon, Pennsylvania. In Mt Lebanon, Anne was active in the American Association of University Women and was a volunteer and later an employee at the Mt Lebanon public library. Anne loved her work at the library where she made many lifelong friends. In 2003, after some years of retirement, Anne and Bill moved to Washington to be near their daughter Claudia and her family. They spent eight years in Bellingham at Merrill Gardens. Very shortly after a planned relocation to Chandlers Square in Anacortes, her husband Bill took ill and passed away at the age of 92. Anne was a wonderful person who was cherished by all who knew her for her insightful mind and gentle nature. She is preceded in death by her husband Bill and her daughter Alison, and by her six brothers and sisters. She is survived by her daughter Claudia Pearl and by her son William Gordon, her sons-in-law Mike Pearl and Bruce Baumann, her four grandchildren, Jesse Friebolin, Travis Pearl, Joseph Poccia and Kaili Rosett, and her three great-grandchildren, Benjamin Rosett, Sam Rosett and Surrey Friebolin. A family memorial gathering will be arranged at a later date. You may share memories at www.westfordfuneralhome.com.

Anne Gordon, a resident of Chandler's Square for many years, passed away peacefully in Anacortes, Washington on January 6, 2017 at the age of 96. Anne was born at home on April 29, 1920 to Howard and Annie Powell on a wheat farm near the prairie... View Obituary & Service Information

The family of Anne P. Gordon created this Life Tributes page to make it easy to share your memories.

Anne Gordon, a resident of Chandler&#39;s Square for many years,...