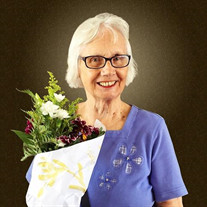 Rosemary would like to let you know that she departed this life at 7:00 a.m., Tuesday, September 27, 2016, two days before her 87th birthday- in a peaceful and non-medicated state, at Jero- just as Mt. Baker began to rise. Rose, as her husband Jerry so fondly called her, was born in Chicago, Illinois, the eldest daughter of 9 children, to Fred and Dorothy Germain. She was educated in Ft. Wayne, Indiana and earned her teaching degree from St. Francis College. This resulted in her being hired to teach at Lagro High School in Lagro, Indiana where a young looking, local farm boy found her picture in the paper. That young looking farm boy was a Purdue University grad student who fell in love with "Lil Toot", defining the phrase "love at first sight". Jerry and Rosemary's life adventure began at the moment she took that job. She married Charles Jerry Flora on December 28, 1950. Together they would spend the next 62 years, sharing the adventure of life - from summiting snow-peaked mountains, to kayaking down raging rivers, and from riding camels in Egypt to diving the oceans of the world. She raised four children: Deva, Christopher, John and Lise, and devoted herself to her three grandchildren: Etosha, Addeson and Keana. Preceding her in death are the love of her life, Jerry Flora and her son Chris. She was a mom, a grandma, a teacher, an active member of the community, Grand First Lady of Western Washington State College (aka Presidents Wife of WWU), President of the League of Women Voters, a master diver, underwater photographer, a good bowler and longtime tax consultant for HR Block. And of course, as her children and grandchildren will all attest (and anyone else who ever tasted her cooking), she was the best cook in the world! When their own children were grown and gone, Jerry and Rosemary spent several years living in Kiribati-studying her reefs and beaches while living on Abemama and later teaching at St. Joseph's College on Abaiang. Rose loved good food, good books, good movies, good conversation; long walks and helping others. This world is a better place for her having been with us. She is loved. She will be missed. And she is wished Godspeed in her next life. The family requests that gifts in memory of Rosemary be made to the Jerry and Rosemary Flora Summer Stipend in Marine Biology at Western Washington University online at http://alumni.wwu.edu/give-flora , by phone at 360-650-3027, or by check made payable to the WWU Foundation and mailed to: WWU Foundation, 516 High Street, Bellingham, WA 98225-9034. Please indicate Jerry and Rosemary Flora Stipend on the memo line of your check. You may share your memories at www.westfordfuneralhome.com.

Rosemary would like to let you know that she departed this life at 7:00 a.m., Tuesday, September 27, 2016, two days before her 87th birthday- in a peaceful and non-medicated state, at Jero- just as Mt. Baker began to rise. Rose, as her husband... View Obituary & Service Information

The family of Amelia "Rosemary" Flora created this Life Tributes page to make it easy to share your memories.

Rosemary would like to let you know that she departed this life...