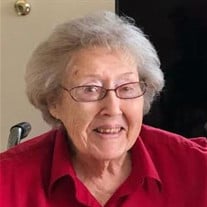 Alice Briant, aged 95, died on October 12, 2019 at Birchwood Adult Family Home in Bellingham, WA. She was the kindest, gentlest, smartest, and sweetest person on earth and she will be missed so much by so many people. Mom was born June 23, 1924 in Burtrum, Minnesota to the late Glen and Clara (Lentz) Gardner. She grew up on a farm without electricity and running water with her late brother Donny. She told many entertaining tales about life on the farm. She described her childhood as full of fun and adventures, even bundled up to walk to school in temperatures of 30 below zero, and sledding or skating on the nearby lakes. Summers were spent biking, swimming, and fishing. An excellent student, mom went to a one-room schoolhouse and later graduated valedictorian from her high school, which she attended in the larger town of Swanville while sharing a small apartment with a schoolmate during weekdays. Mom attended St. Cloud Teacher’s College in St. Cloud, Minnesota. After only three years, Alice graduated with honors and began her teaching career where at a church social, she met her future husband, Glenn E. Briant, son of a local grocer. He had recently finished his stint of honorable service in the US Army and intended to use his GI Bill benefits to finish his degree at the University of Denver. Glenn and Alice were married on June 17, 1949 and soon moved to Denver so dad could complete his studies. She was predeceased by still-born twin sons. Their daughter, Teresa Louise (Terri) was born in 1953 in Denver, but after graduation, mom and dad began a life of transfers from one place to another as dad’s sales career advanced. They lived in Santa Rosa, California where son Robert Glenn (Bob) was born in 1956, later moving to Stockton, San Jose, and Fullerton, California. In 1968 the family moved to Washington State and mom’s love of the Pacific Northwest began immediately. She spent her career teaching, lastly at Sammamish High School as a paraprofessional working 1:1 with kids who needed more attention and care. She was so proud and excited to be one of the first wave of faculty and student learners to visit China after it loosened its travel restrictions. While she enjoyed her job, mom’s true passions found expression in salmon fishing and crabbing, making wonderful meals for family and friends, baking famous cinnamon rolls, sugar cookies, and ring-a-lings, sewing perfectly lovely quilts, traveling with dad, and making dear friends wherever she was. She and dad moved to Whidbey Island after years of weekend stays and built a lovely (and popular) home on a cliff near Langley. They retired early and spent years having a ball, traveling the US and Canada in their RV (dubbed “The Sponge” for its many repair costs). Dad passed far too young at 66 in 1992, but mom faced this new phase in her life with her usual grace and positivity. After some years of continuing to live in her beloved Whidbey home, she made the decision to move to Lynden, Washington. She had visited the area in her travels and later, family members moved to Whatcom County and soon knew Lynden was the place for her. She quickly became an active member of Hope Lutheran Church, where she attended the quilting group and the book club. Mom was a life-long reader and her tastes ranged from memoirs to mysteries, politics to poetry. When mom was no longer able to drive, she moved to Meadow Greens in Lynden where she lived until her health necessitated moving into a care setting, Birchwood Adult Family Home. She received only the best of care from their staff and her family is so grateful for that loving attention. She also adored her primary care provider at Center for Senior Health, Erin Baumgart, ARNP and long-time dentist, Steven Sawicki, DDS. Alice’s greatest joy were her grandchildren: in Richland: Emily Booth Erickson (Leon); in Bellingham: Jessie Briant Griffin (Alex), her great-granddaughter Neko Alice Griffin; and in Lynnwood: grandson Jacob Briant (Nicole Leong). Her grandson Jacob describes mom as “really a perfect grandma, like someone from a book or movie”. Granddaughter Emily writes, “She has been an eternally wonderful guiding force in my life.” She is also survived by daughter Terri Briant Booth and son-in-law Ken Booth in Everson WA, son Bob Briant and daughter-in-law Jane Briant in Kirkland, WA, nephew Lowell Gardner (Joanne) in Edmonds, WA and niece Donna Gardner Brandon (Noel) in Renton, WA, as well as niece and nephews from the Briant and Henriksen families. In lieu of flowers, Alice’s family would like donations to be made in her name to Hope Lutheran Church, 900 East Grover, Lynden, WA 98264. A memorial service and celebration of her life will be held at 11:00am at the church on November 9, 2019 followed by fellowship and social time at the church.

Alice Briant, aged 95, died on October 12, 2019 at Birchwood Adult Family Home in Bellingham, WA. She was the kindest, gentlest, smartest, and sweetest person on earth and she will be missed so much by so many people. Mom was born June 23,... View Obituary & Service Information

The family of Alice A. Briant created this Life Tributes page to make it easy to share your memories.