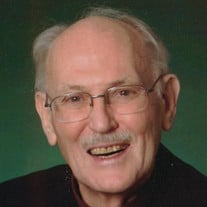 Dr. Alden C. Smith, age 84, died peacefully in Bellingham on Saturday, February 11, 2017. Alden was born June 15, 1932, to the Reverend Theodore Garland Smith and Edith Shaw Smith in Wellsville, NY. His father, the minister at University United Methodist Church in Buffalo, passed away when Alden was 14. Alden moved to St. Cloud, FL with his mother and sister Sandra, to be with Edith’s parents. It was a major transition from the stricter standards of attire, comportment, and academics in his Buffalo school to the more rough and tumble of the Deep South of that era. The dress clothes came off after the first day of school, never to return. Alden excelled in his new life, active in sports (football, baseball and basketball), acting in/writing plays, and singing in the church choir with his family. Alden received a BS in Speech at Florida Southern College in ‘54. After 2 years in the Army in White Sands, NM, Alden was a disc-jockey for WLJS in Old Saybrook, CT. A Masters in Speech Education from Syracuse University was followed by a PhD in Rhetoric and Public Address at the U of Illinois. His doctorate dissertation was “Reverend Sydney Smith’s theory of wit and humor”. Alden taught at the U of AZ and Tufts University and then moved his family to Bellingham, WA to start his career at Western in ’66. He taught courses in Mass Media, Radio/Television Production and Script Writing, and served as broadcast advisor until retiring in ‘99. In ‘90 Alden married his second wife Eunice, also a preacher’s kid. They enjoyed 26 wonderful years together and spent time in La Conner, Port Townsend’s Jazz Festivals, Victoria, BC, the Washington/Oregon coasts, Alaska, New England, Florida, the Panama Canal, Paris, France and at his home on Lake Whatcom. Over the years he enjoyed a wide variety of interests, singing in choral groups throughout school and with the Mount Baker Toppers, Whatcom Chorale and the Church Choir and Men’s Chorus at First Congregational in Bellingham. He was active in Reader’s theater and the Bellingham Theatre Guild. Other interests included camping, fishing, sailing on Lake Whatcom, rock hounding, jewelry making, woodworking and going to garage sales. Throughout much of his life there wasn’t much he enjoyed more than the give and take of building on a good joke. Alden was preceded in death by his parents, and sisters Esther Margaret Irving and Dorothea Rodgers Tripp. He is survived by his wife Eunice Wheeler Smith; sister Sandra Shaw Smith; children Kevin Smith (Petra), Kirsten DeLara (James) and Sydney Smith (Nelly); grandchildren Pia, Elijah and Joshua Smith, and 10 nieces and nephews. Memorials may be made to First Congregational Church Music Fund, 2401 Cornwall Avenue, Bellingham, WA, 98225, or to: Interfaith Coalition, 910 14th Street, Bellingham, WA, 98225. A Celebration of Alden’s life will be held at the First Congregational Church on Saturday, February 25th at 1 PM. Reception following. You may share memories with the family at www.westfordfuneralhome.com.

The family of Alden C. Smith created this Life Tributes page to make it easy to share your memories.